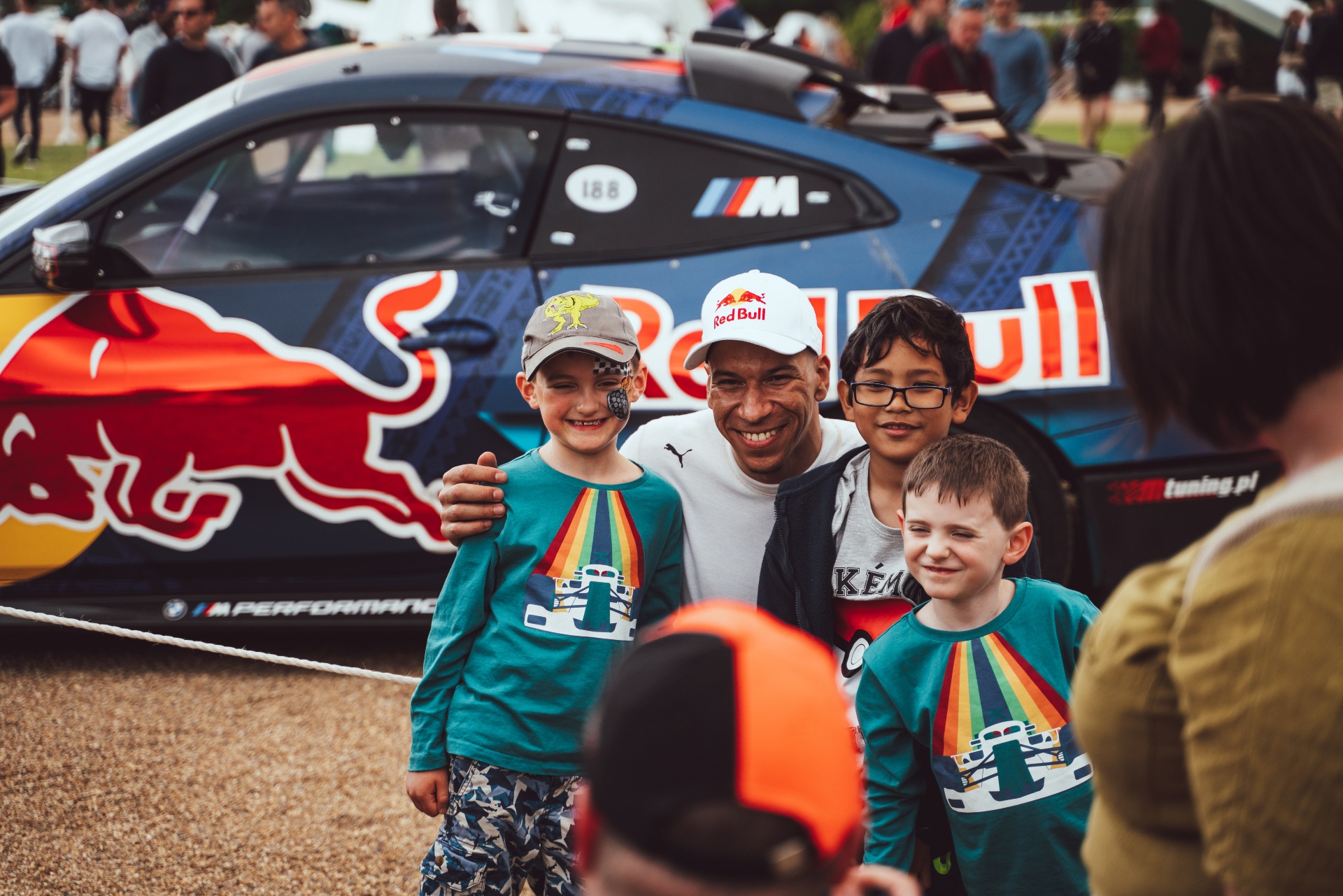 The quality and sheer variety of cars and bikes attending the 2022 Goodwood Festival of Speed means that summarising the event isn’t a simple task – but what can we take away from this masterclass of automotive experience, and equally as important, what were our highlights; our favourite cars, show stands and goings on?

This year’s event theme was ‘The innovators – masterminds of motorsport…’ which according to the Founder of the Festival of Speed, the Duke of Richmond, “…allows us to celebrate some of the greatest achievements in history, while also highlighting the event’s evolving focus on future technology.”

Watch this recent film we produced for Lamborghini, featuring the Duke of Richmond himself.

The 2022 event was the first full-scale version since 2019, and its return heralded a thrilling prospect for spectators, manufacturers and competitors alike. In fact, tickets were sold out across all four days. With the Festival of Speed perhaps the world’s leading ‘motor show in action’ – showcasing the latest hypercars, luxury SUVs, sports cars, performance EVs and everything in between – we were keen to catch up with clients and friends, explore the impressive show stands and soak up the famous Goodwood atmosphere. There’s also the timed hill climb runs, which aren’t to be missed!

For fans keen to get close to their heroes, both in the metal and the flesh, the Festival of Speed remains one of the best – if not THE best – dates in the calendar. Legendary race cars from the 60s and 70s, such as the Porsche 917, can be seen side-by-side with modern Nascars and Edwardian-era, chain driven museum pieces. The Festival is also an opportunity for manufacturers to reveal their latest products, collaborations and messaging strategies, immersing the public in unique show-stopping installations. For content and experience specialists like us at Foxtrot Papa, this proved incredibly insightful.

In addition to the truly world-class automobiles on display, the Festival of Speed hosts something for everyone on the lawn in front of Goodwood House. On the far side of the hill climb course, you can explore the various manufacturer show stands, Electric Avenue pavilion and Future Lab expo, which showcases cutting edge new technologies that will change the way we live tomorrow. Stroll further and you’ll find the Goodwood Action Sports arena, numerous children’s entertainers, branded hospitality areas and countless trade exhibitors and food stalls. Further still from the house, the Forest Rally Stage is home to Goodwood’s very own off-road rally track, which is in use throughout the weekend. The organisers really have thought of everything.

Some of our 2022 Goodwood Festival of Speed highlights include: 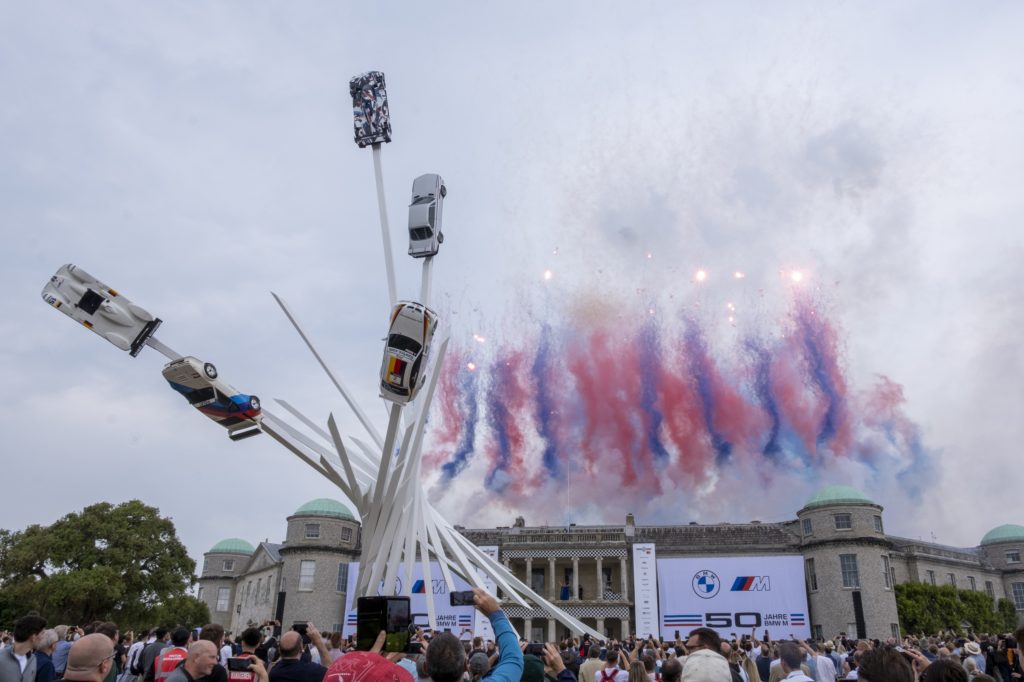 Each year the Festival celebrates a particular manufacturer by way of a stunning Gerry Judah-designed sculpture/main feature in front of the House, and 2022 was no different. BMW’s M Division took centre stage with a handful of legendary (real life) M models thrust into the sky in Goodwood’s usual fashion, celebrating 50 years of BMW’s performance arm. Word on the ground is that the installation cost BMW a cool £1 million, but there’s no denying the impact! 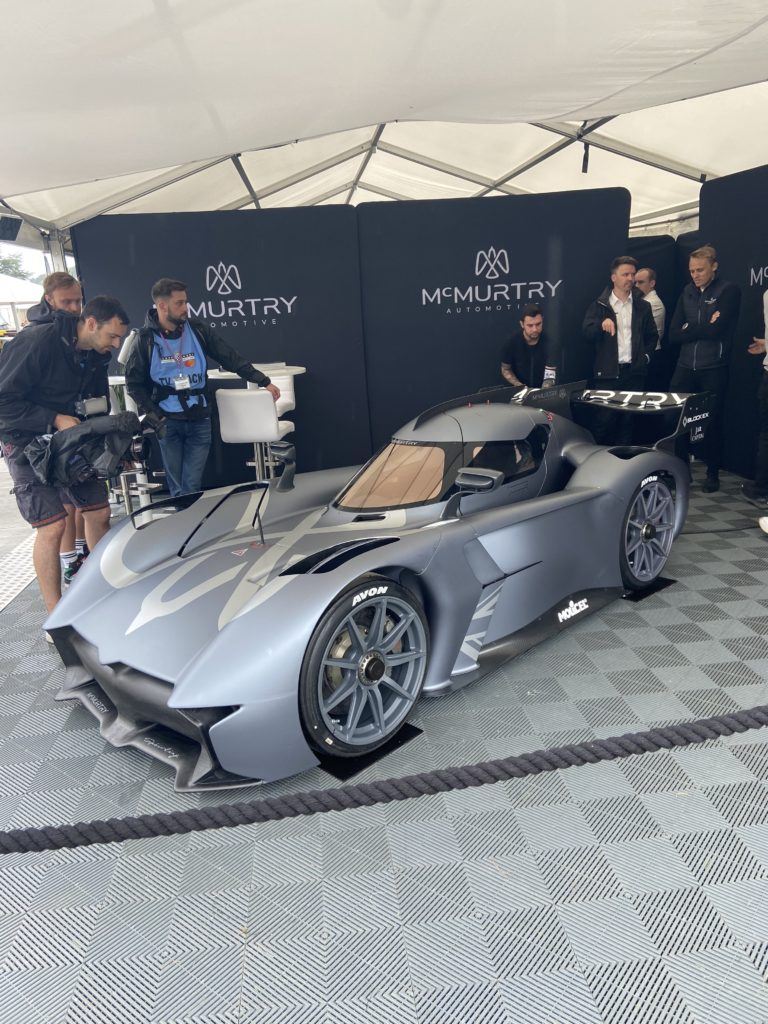 Capable of 0-60mph in just 1.5 seconds the McMurtry Spéirling is British engineering at its finest; a lightweight, all-electric, single seater fitted with twin fans to provide up to 2,000kg of downforce – even when stationary! Purpose built to see what could be achieved by taking a step away from road cars and existing racing categories, the team behind the diminutive Spéirling arrived at Goodwood with their eyes keenly set on breaking the hillclimb record, held by the mighty VW ID R. With Max Chilton at the wheel, the team did just that on Sunday in dramatic fashion, setting a jaw dropping new course record of 39.08 seconds. 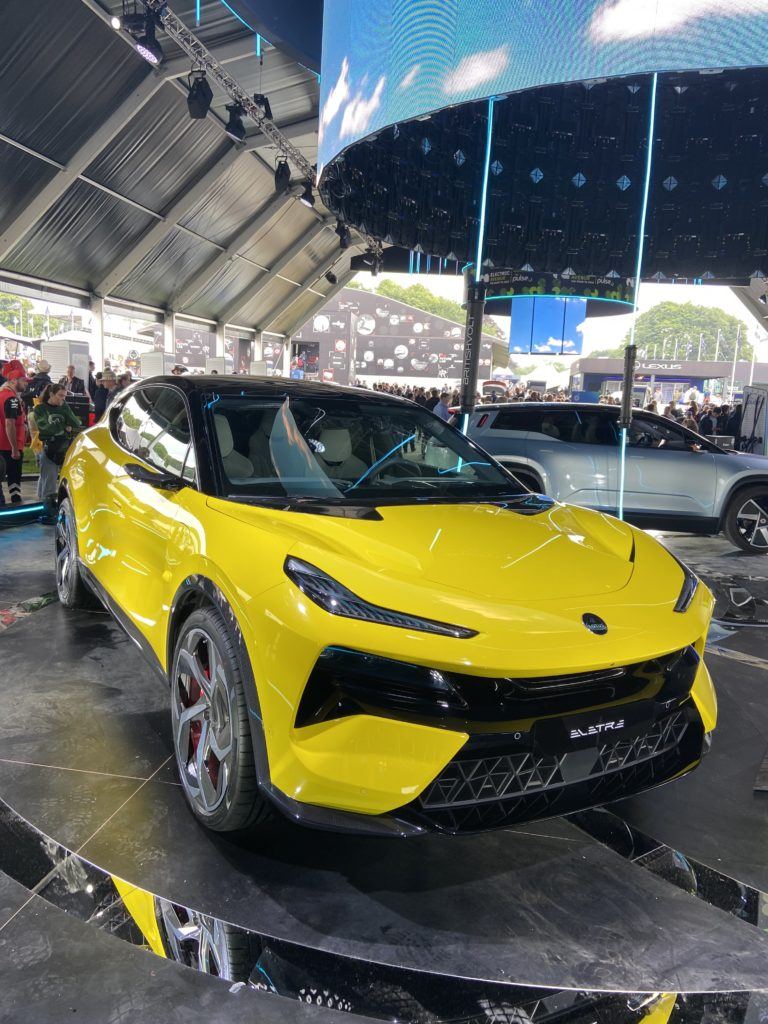 If the McMurtry Spéirling’s record breaking hill climb performance proved one thing, it proved that electric power is definitely here to stay. The Electric Avenue is Goodwood’s way of celebrating new electric road cars that will soon be available to buy. On our visit we spotted the stunning new Lotus Eletre hyper SUV in resplendent, on-brand yellow, the latest take on the iconic Renault 5 supermini (also in bright yellow) and the handsome Ford Mach-E GT. 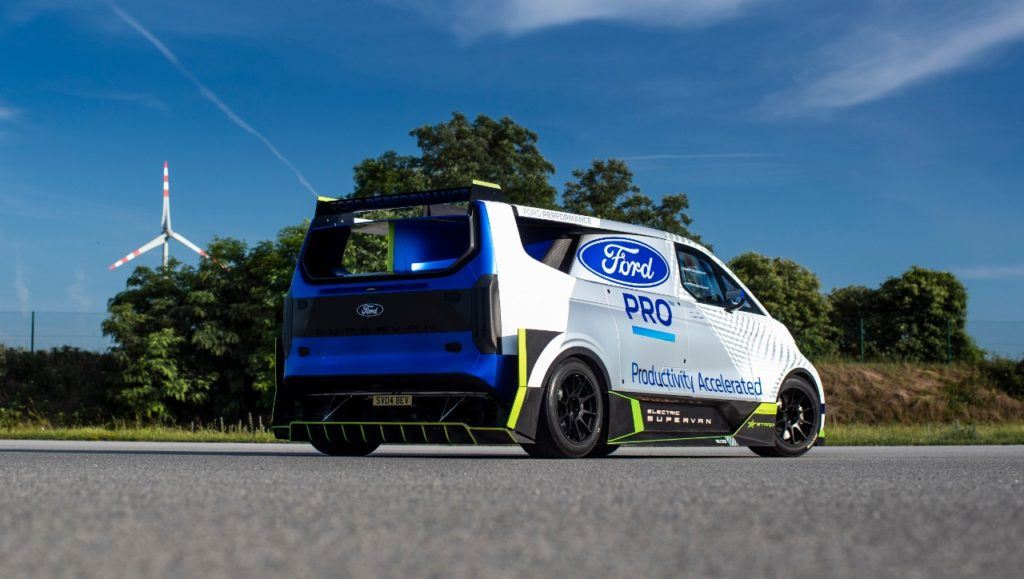 Continuing an age-old tradition of producing one-off, souped-up Transit vans, Ford brought along its latest Transit concept, the suitably bonkers Ford Electric SuperVan. Producing around 2,000hp from its all-electric four-wheel drive system and featuring rear aerodynamic buttresses that wouldn’t look out of place on the Ford GT, the SuperVan is a far cry from its commercial counterpart – even though its wild look is actually inspired by the recently-announced new E-Transit Custom. Painted with a Ford Pro livery with the message ‘Productivity Accelerated’ proudly printed along its side, the SuperVan recorded a blistering time of 46.58 seconds with multiple championship-winning race driver Romain Dumas at the wheel. 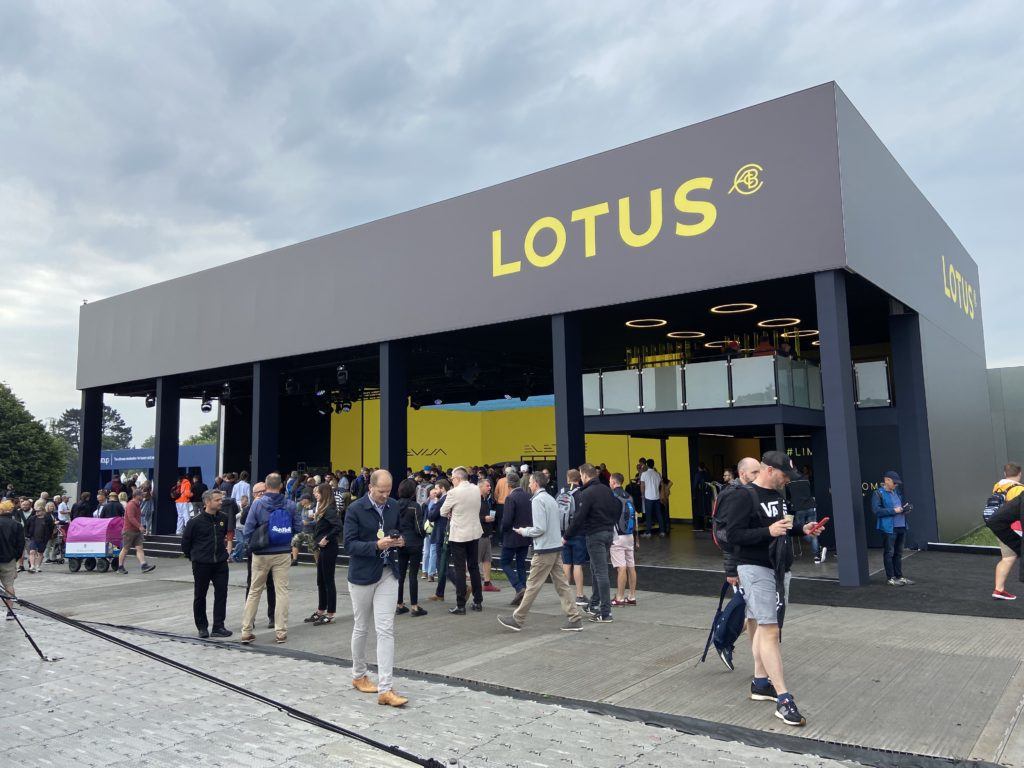 Situated in a prime, central location on the front lawn, the impressive black and yellow Lotus show stand was buzzing with intrigued car fans throughout the weekend – according to our friends at Lotus. With no less than four brand new cars on display, including the Evija, Eletre and Emira GT4, the Lotus Emira press fleet was also on hand for the public to sit in and explore. We were also delighted and proud to see our Emira GT4 launch film playing on the huge screens at the back of the stand – proving that the best marketing films work on any platform! 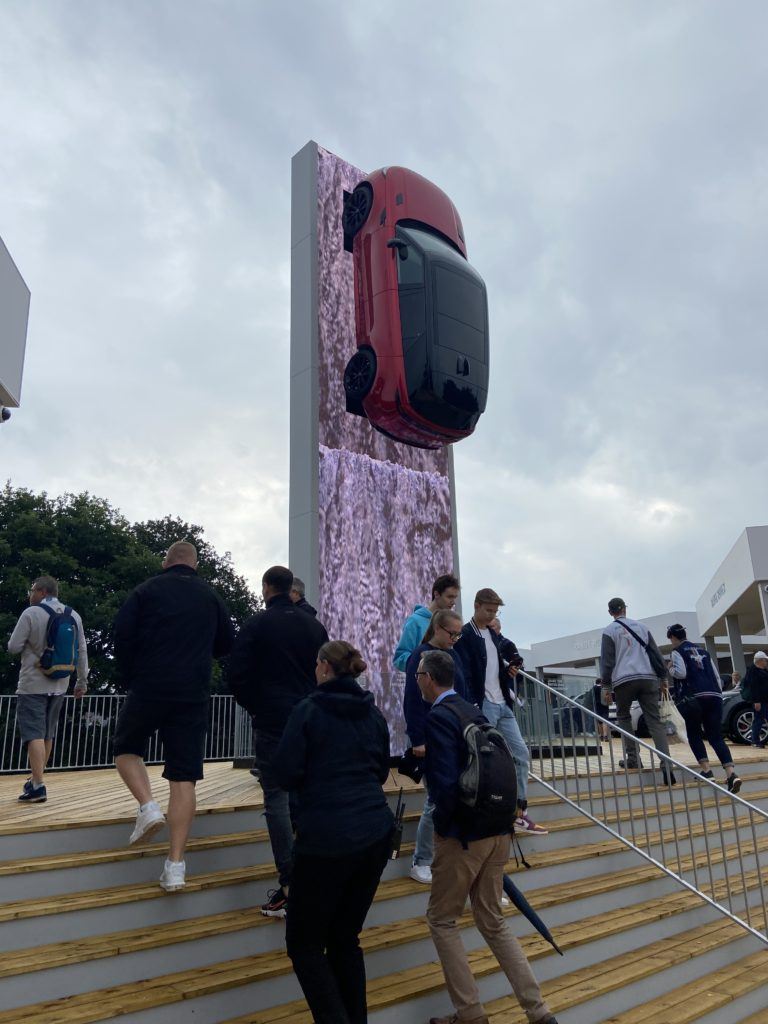 The new Range Rover Sport took centre stage on Jaguar Land Rover’s show stand at Goodwood this year, featuring as part of an impactful, digital totem installation inspired by the new model’s recent launch film, shot at a hydroelectric dam in Iceland. Adjacent to this was the entrance to the Jaguar Driving Experience track, on which members of the public could sign up to a passenger ride in a number of F-Type sports cars – Goodwood is all about immersive product experiences. The comprehensive stand showcased the entire range of models from both brands as well as the sophisticated new Range Rover and new Defender 130. Operating in and around a raised, ring-shaped walkway, Defender models from the Land Rover Experience provided guests with off-road tuition and demonstrations.

What makes Goodwood so good?

The truth is, the Goodwood Festival of Speed is packed full of highlights, with very little in the way of physical barriers or cordoned off areas. For car manufacturers looking to showcase new products in delectable surroundings both statically and dynamically, the festival offers something unique compared with other track-based or static car shows. For spectators, it’s undoubtedly this high quality, highly immersive, live-action experience that keeps them coming back year after year.