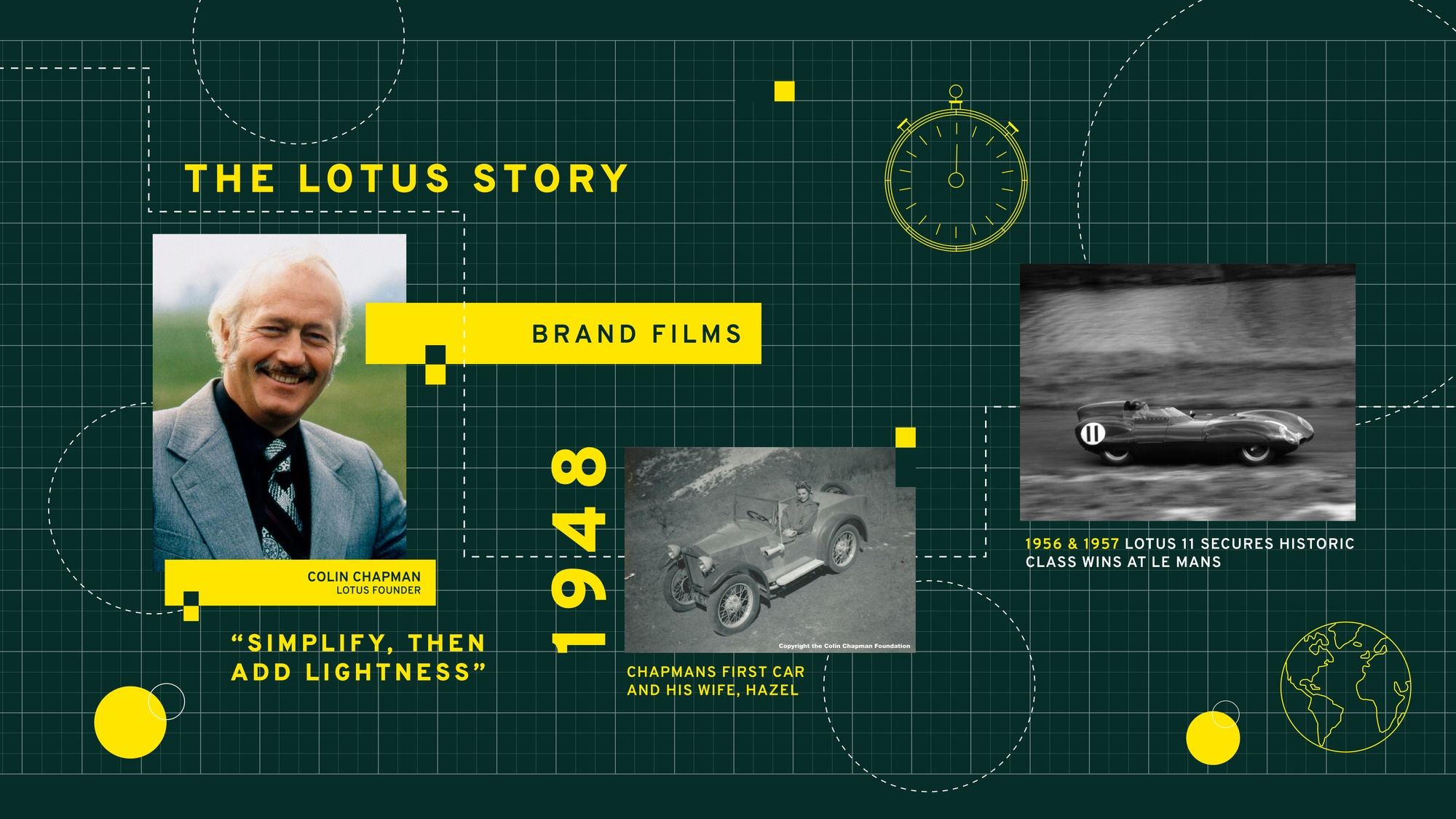 Lotus has been through an energising brand refresh recently, launching its new strapline ‘For the Drivers’. To accompany this, Lotus needed film assets for its online channels to tell the key parts of the brand story in this new light.

After an extensive deep dive into the Lotus brand and its core values, four film topics were agreed upon: design, performance, hand-built and brand story. The aim was to look back with pride and to look forward with excitement, so both the past and the future were to be celebrated in equal measure. There was also a wealth of material at our fingertips, so the most efficient way was to use key spokesperson interviews over montage footage.

In order to tell this incredible story, we designed a technical drawing board-style environment that was inspired by the brand’s longstanding links to precision engineering. This acted as a photo board allowing us to bring dozens of photos to life, as if we were Colin Chapman himself, sat at the technical drawing board flicking through past achievements, whilst working on an exciting new project.

The role of this film is to help prospective customers understand exactly what ‘For the Drivers’ means. To provide the most accurate definition, we approached several key Lotus employees who were able to give their version on the thinking and meaning behind the brand slogan. From their interviews, we pulled out several key words that serve to explain the Lotus driving experience and superimposed them across dramatic action footage. The overall effect was simple, to the point and highly effective.

One of the most enduring philosophies at Lotus is that every car is designed to be as beautiful as it is brilliant – something the brand refers to as ‘form through function’. In this film we interviewed Design Director at Lotus, Russell Carr, as he eloquently explained the inspiration behind this idea. We also made sure that each key point was visualised and explained by a relevant image complete with yellow on-screen annotations.

One of the most incredible things about Lotus cars is that they are still individually hand built – each one crafted by a team of highly skilled technicians. This is a key story to tell and a USP in the automotive industry. We interviewed two people who work on the production line to get their view on what it means to be part of the ‘One Team’ at Lotus.

The result was a suite of four versatile, cost effective and impactful brand films that tell the key stories of Lotus from the experts themselves, in their own words. This allowed their genuine passion to shine through and to subtly focus on the biggest factor behind any loved brand – the people.