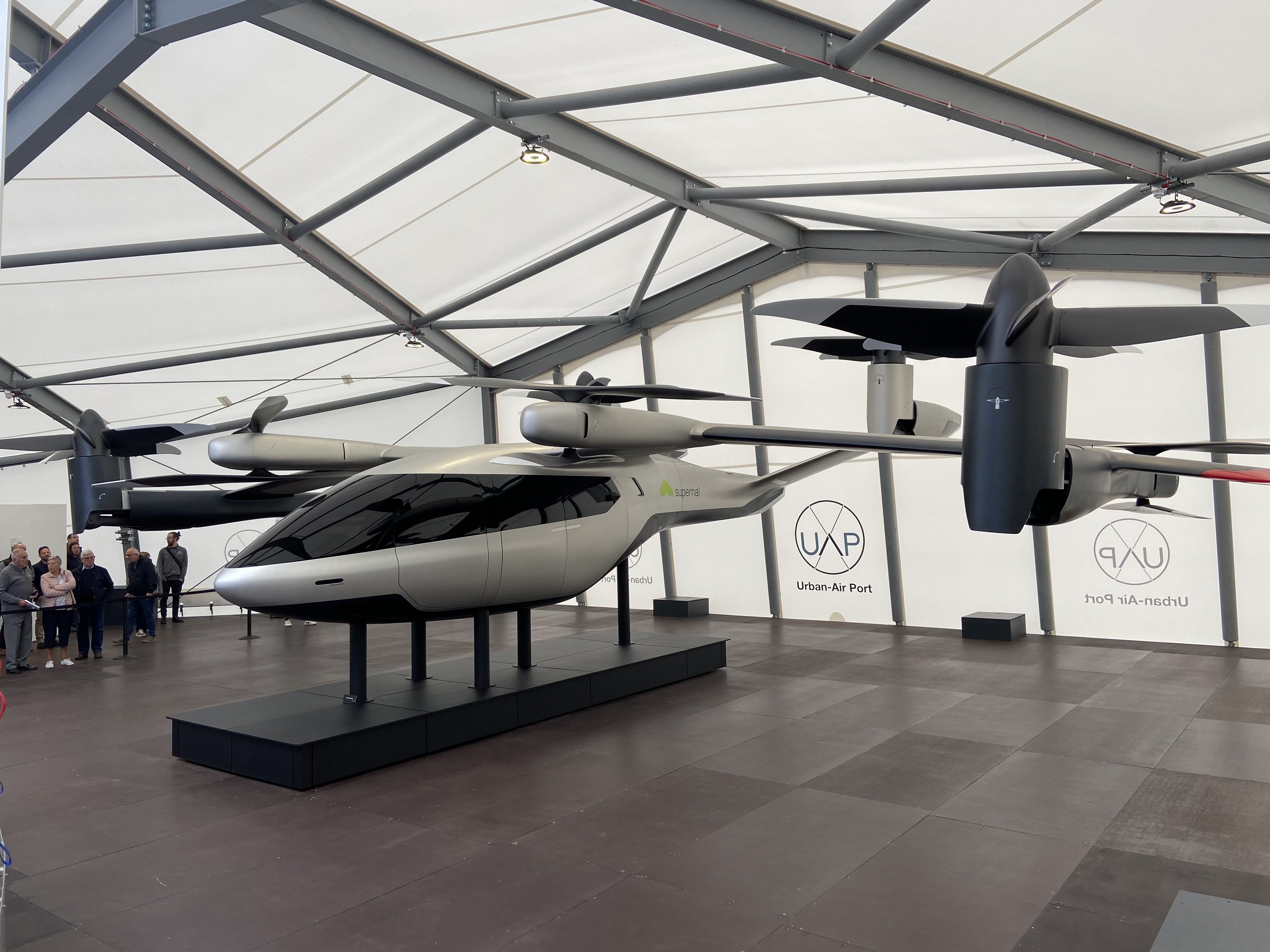 Flying taxis definitely do exist! The term ‘electromobility’ includes much more than just electric cars and scooters, in fact, the era of the electric flying taxi is very nearly upon us. But what’s holding this exciting new form of transportation back and what role does it play in the future of mobility? To find out more, Foxtrot Papa visited the launch of Air One in Coventry, the world’s first fully operational Urban-Air Port for flying taxi aircraft and cargo drone technology. During our visit we spoke to Urban-Air founder, Ricky Sandhu. But first, allow us to introduce you to the world of eVTOLs…

What is an eVTOL?

Often classed as ‘the new age of transport’, Electric Vertical Take-off and Landing (eVTOL) craft – flying taxis to you and I – no longer just belong in science fiction movies. In fact, there are a surprising number of organisations lining up for their share of the urban mobility airspace, in what experts are estimating to already be a billion dollar industry.

Essentially large drones, often featuring up to eight or more propellers and sometimes even small wings to create additional lift at speed, eVTOLs can travel short-to-medium distances producing zero harmful emissions. Quieter and cheaper to operate than helicopters, and cruising at an altitude of around 3,000ft, eVTOLs are ideal for use in urban environments where traffic congestion and air and noise pollution are hot topics. One journey often used to demonstrate the benefits of eVTOLs is from London Heathrow to Canary Wharf, which will be possible in approximately 10 minutes by eVTOL.

The race to the skies

Although many large aerospace and automotive brands are developing or investing in their own eVTOL concepts, established names such as Airbus, Boeing, Hyundai and Rolls-Royce, there are also countless other startups keen to compete. Some have even completed several test flights with very encouraging results. But if they’re so advantageous over other forms of aircraft, why aren’t our skies full of them already? The answer isn’t a simple one but is largely due to the obvious safety certifications for each concept, the creation of new airspace legislation and the all-important ground infrastructure.

Urban-Air Port is a pioneer of seamless infrastructure

This is where Urban-Air Port comes in; a UK-based startup focusing its efforts purely on overcoming the ground infrastructure challenges that this new era of transport demands. Partnering with advanced air mobility specialist Supernal (the company behind the stunning S-A1 eVTOL concept – main image), Urban-Air Port’s mission is to remove what it believes is the largest single constraint to sustainable air mobility. The company believes this would create a zero-emission-mobility ecosystem that will significantly cut congestion and air pollution from passenger and cargo transport.

Interview: What is the Urban-Air Port and can you describe the thinking behind it?

“As an architect I decided to pivot and instead of focusing on buildings, I started to focus on the bits in between, the infrastructure. That led me to do some work with Airbus which is developing a range of different air vehicles for cities, and in order to support those vehicles and new modes of mobility, we’re going to need the right infrastructure in place.”

“Urban-Air Port is about me leveraging my knowledge of architecture from the world’s leading practice and channelling that into a new centre. That led me to this, the Air-One – an ultra-compact, rapidly deployable, multi-functional operations hub for manned and unmanned vehicles providing aircraft command and control, charging/refuelling, cargo and passenger loading and other mission specific facilities.”

How is Urban-Air Port taking the concept of a zero emission transport hub one step further?

“Electric cars will make an impact on the environment, but they still have rubber tyres and brakes, and rubber tyre wear and brake particulate matter combined are the largest particulate in the atmosphere that we breathe in and the largest pollutant in our oceans, and it’s carcinogenic! Electric cars still significantly add to global emissions – this is where electric taxis and electric cargo drones go one better, because there’s no brakes or tyres – it’s a much cleaner journey.”

“We recognise that we can’t take everyone off the ground and into an air taxi, but what we can do with electric drones and air taxis is add another layer of mobility and take some vehicles off the road. Whether they’re electric or not it doesn’t matter, it eases congestion. We think that’s important.”

“With 200 fully-operational Urban-Air Port units operating 12 hours a day, we can take approximately 28 million passengers per year off the roads and into the skies.”

What role does the electric car play in the Urban-Air Port?

“As people move back into cities, that trajectory of urban migration means we have to ask how we are going to provide mobility for them. We can’t all use incumbent services and the roads will be clogged, so we need new technologies and we need to embrace them. We can only embrace them if they’re properly considered and holistically integrated.”

“Electric cars are all very well, but where are all the chargers? And why is that happening so slowly? The National Grid also can’t support even a quarter of the population to use and charge electric cars with the current capacity. Here at Urban-Air Port, we’ve made a big deal showing how electric vehicles will be charged as you arrive. It’s clear we’re part electric charging station – we’ll encourage you to drive here in your electric car because you will know there are chargers here. We don’t have to consider that because this is all about air mobility, but for us it’s about a holistic integration, and for it to be sustainable, it doesn’t need to have a green roof or a small garden, it needs to be viable, holistically considered and integrated.”

What else is important to you?

“I think we’ve considered everything here to demonstrate what our ecosystem can deliver – from efficient car charging to high quality retail outlets – and how transport infrastructure and future mobility could successfully be joined together and solve that holy grail of a seamless zero emission journey.”

“It needs innovators like us to show what is possible. We’re proactively working with the UK government, the Civil Aviation Authority in the UK and the various air infrastructure organisations, and we’ve been leading the way together. I think we’ve now shown how we can have a holistic solution, and we sincerely hope that the innovators don’t become slaves to the regulators.”

What’s the next big hurdle?

“We’re now focused on our order book, which is growing in value, and we have a range of products. This Air-One (that we’re standing in), Marine-One which floats on water and Resilience-One, a port designed to operate in disaster areas. Finally, we also offer City Box for cargo drones, which is the future of your postbox.”

“If we have more efficient coordinated infrastructure like we’re suggesting, that frees up space for more green infrastructure; trees, green spaces, wildlife and biodiversity, which helps to clean the air.”

Are there any other benefits to Urban-Air’s concepts?

“Urban-Air Port is an EV charging station for cars, buses, coaches, taxis, drones, eVTOLs and electric helicopters of the future. We join it all up into one as opposed to having an EV charging station for cars here and buses there… and so on. We’re too fractious at the moment. We need one model where we can join everything up because electric power will soon be everywhere.”

“On top of that, we’re yet to realise the full socio-economic benefits of planting a hub like this in certain areas. Imagine if each and every Urban-Air Port could single handedly raise house values and investment in its immediate area!”

“If you’re going to bring aviation into urban locations you cannot ignore the intermodal connectivity that’s going to be required, and then you can acutely solve a lot of other problems at the same time. In the UK, we need to look after the current transport systems and networks by taking the pressure off and providing other solutions. I think the adoption of advanced air mobility can really move the needle towards a brighter, cleaner future.”

So, when will you and I be flying in an electric taxi?

Following our conversation with Urban-Air Port’s founder, the advantages of advanced air mobility and the use of flying taxis and cargo drones are incredibly clear. Given Sandhu’s holistic, infrastructure-first approach to this new form of transport and taking into account the speed of uptake of electric vehicles on our roads, we can only agree with his prediction that this type of service will be fully available to the public by 2030.