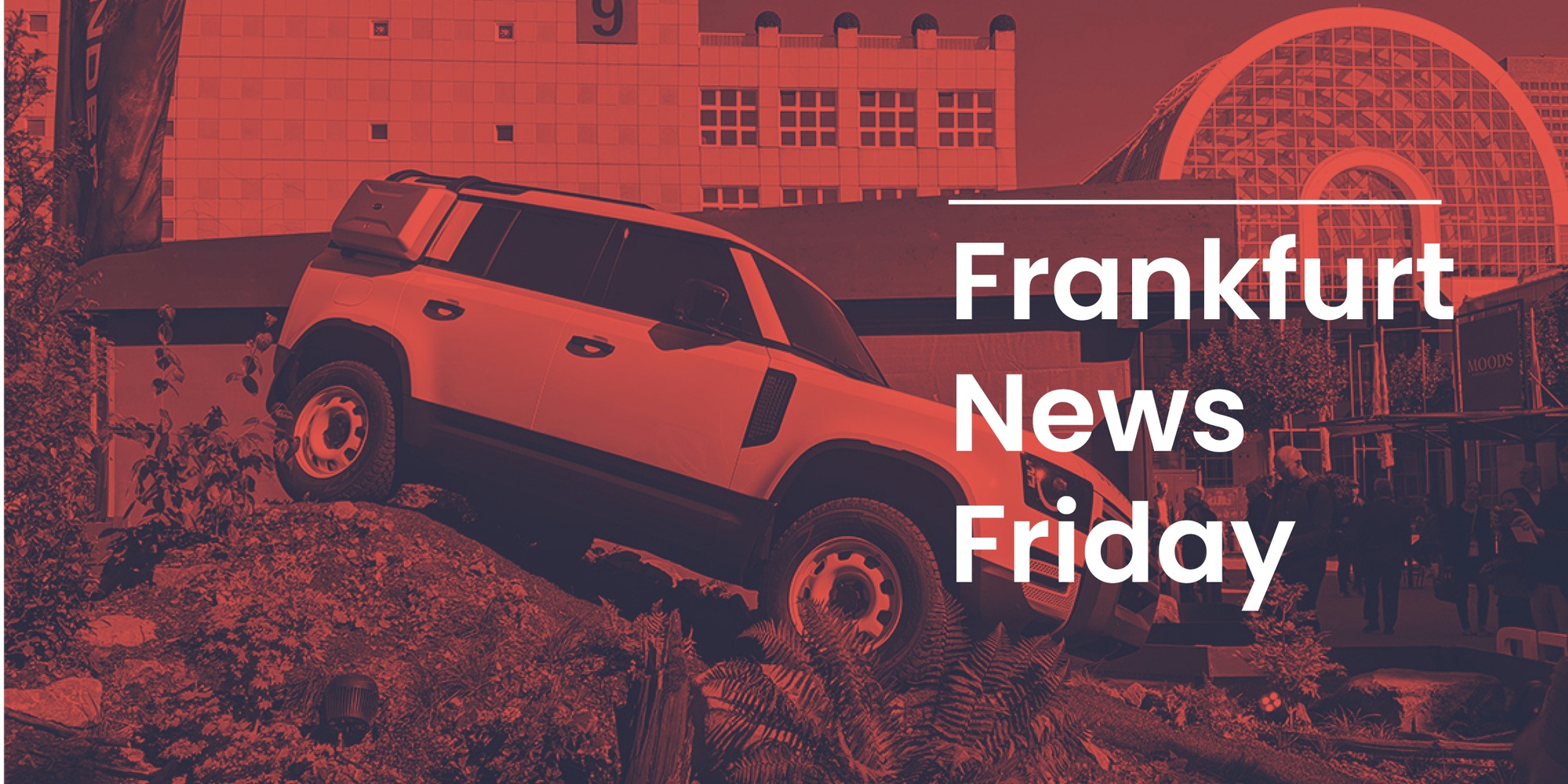 Unless you’ve been incredibly busy, or hiding under a rock for the past few days, you’ll know that this week’s 2019 Frankfurt Motor Show was a rather important one for several major car manufacturers. In this week’s bumper edition of Frankfurt News Friday, we round-up our top 10 automotive news stories from the show floor and beyond.

German chancellor Angela Merkel opened the show on Thursday with a call-to-arms to the industry, highlighting the “Herculean task” of creating “more efficient, climate-friendly vehicles” in order to meet Europe’s challenging 2030 climate targets. With a brief nod to “dieselgate,” she acknowledged that trust in the industry was at an all time low and called on manufacturers to invest in the development of cheaper, greener, more sustainable electric cars. Sehr gut, Angela.

Elsewhere at the show, CEO of IBM Ginni Rometty suggested that the power of automotive brands will play second fiddle to new ‘driving experiences’ as autonomous vehicles and car sharing become increasingly popular. During an interview with CNBC on Wednesday, Rometty said consumers are increasingly prioritizing digital experiences, for example the ability to connect a car to other smart devices, in their vehicles.

Everyone on the planet, it seems, has an opinion on the new Defender—and if you ask us here at Foxtrot Papa, this suggests a great future for this exciting, reimagined and redesigned automotive icon. Love it or hate it, you can’t ignore the authenticity of a vehicle with this level of off-road capability and true-to-form design functionality – not to mention the 170 optional accessories that are available, which means that even your dog should love it! Long live the Defender.

Shortly before the new Defender was unveiled at Frankfurt, Dr Speth revealed an intriguing teaser image of the upcoming Jaguar XJ replacement. Believed to feature a large amount of electric technology, the shadowy image reveals an I-PACE inspired rear tail light design, hinting at an all-electric powertrain. According to Motor 1, Jaguar’s new luxury model should see the full light of day in late 2019, or early 2020.

5. The Porsche Taycan is here… finally!

It’s almost impossible to mention Frankfurt without discussing the new Porsche Taycan, (again.) This landmark vehicle–not just for Porsche but for the auto industry as a whole–takes the fight to Tesla in the premium performance EV segment, with up to 750bhp in Turbo S form (although we’re not sure Porsche should’ve used the famous ‘Turbo’ badge on an EV). More than just an impressive set of names and numbers however, the Taycan promises to set new benchmarks in terms of handling and performance characteristics.

6. VW’s all-new electric car for the people, can the ID.3 convert you to an EV?

Marking the debut of Volkswagen’s all-new MEB electric-only platform, is the ID.3 the car that will bring the German car maker safely into the EV revolution? According to this article from Auto Express, it might well be… ‘this is a car that Volkswagen’s bosses admit could be as important to the brand as the original Beetle or the Mk1 Golf.’ The first car to feature VW’s controversial redesigned logo (see below) and engineered with a rear-mounted 200bhp motor and 58kWh battery pack, all 30,000 “1st Edition” ID.3 models have already been reserved. Dig around on the ‘net and you’ll also read that there’s a rumoured ‘R’ performance version in the pipeline, too.

German car giant Volkswagen has rebranded, as part of its new strategy designed to deliver a ‘holistic global brand experience’, according to Volkswagen CMO, Jochen Sengpiehl. Part of the rebrand includes a ‘flat’ new logo, which will be rolled out to over 10,000 existing dealerships and on the front and rear of the new ID.3 EV hatchback. According to this article by design title Dezeen, ‘The logo, an example of the trend towards flat graphic design, was produced “in the record time of nine months” by the Volkswagen design and marketing team.’ It continues, ‘It was a collaboration between a total of 19 internal teams and 17 external agencies.’ Are you thinking what we’re thinking?

Who doesn’t enjoy a fast Audi? Hot on the heels of the aggressively-styled RS6 Avant we celebrated several weeks ago, the new RS7 continues the theme albeit with a sloped rear roofline and hatchback boot. Opt for the Dynamic Package Plus option and the unlimited RS7 will hit nearly 190mph, according to Audi.

‘Lamborghini’ and ‘hybrid’ are not words you normally associate with one another, but here we have just that – behold the Lamborghini Sian Hybrid. OK, so there’s still a hulking great, naturally-aspirated 6.5-litre V12 engine in the middle, but for the first time it’s joined by a 48-volt electric motor, which combine to produce a total of 808bhp. Just 63 units will be made in honour of the brand’s founding year.

Remember the ‘blacker than black’ Vantablack X6 we were debating the practical applications of last week? Understandably, it generated quite a lot of buzz at this week’s motorshow, but not for the reasons you might think. Rather than marvelling at its black hole esque bodywork, delegates were most taken aback by the ‘rave room’ it was presented in. As one journalist put it ‘the exhibit space’s bizarre, blue lighting with red and green highlights makes the ultra-black, sleek crossover look straight out of a cyberpunk vision of the future.’ …Remember those super-villains we mentioned? Just saying.