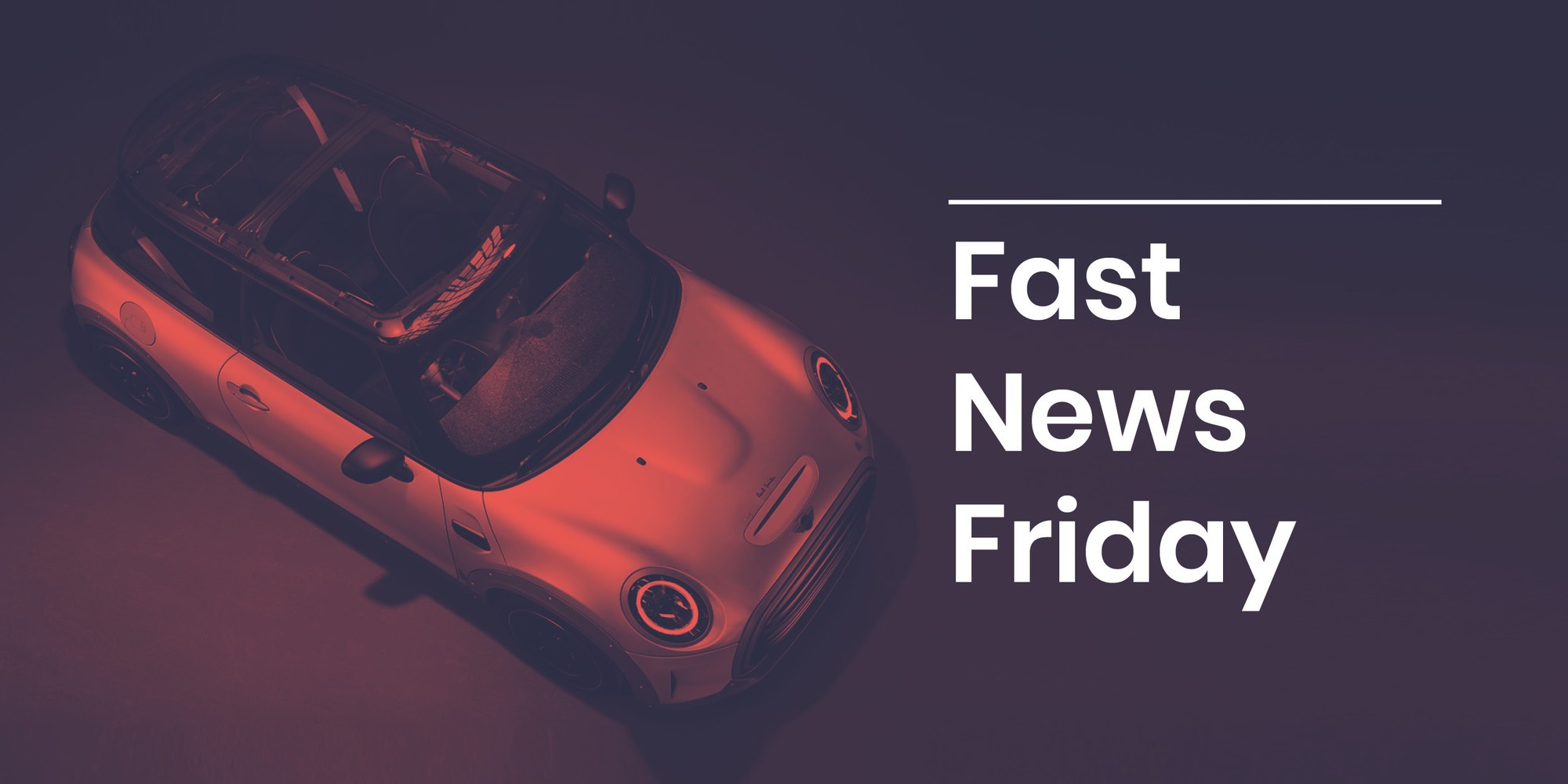 Welcome to Fast News Friday, a weekly round up of bitesize news and content reviews, brought to you by Foxtrot Papa. This week, we’ve found some stunningly simple but beautifully effective press images from Mini, enjoy a vintage travel poster-inspired campaign from Lexus and play spot the difference watching a new film from BMW.

This fabulously minimal car is the Mini Strip, a custom-made one-off Cooper SE created by fashion designer Paul Smith with a focus on sustainable design. The unique, stripped-out car debuted in London recently showcasing several ideas for more sustainable automotive design. To show it off, Mini released this suite of brilliantly simple photographs. As the name suggests, the design team began by completely stripping down a three-door Mini Cooper SE, with only those elements that the established designer viewed as absolutely necessary. Paul Smith’s principle of maximum reduction was applied to produce a “minimalist, high-class design with a fresh and unconventional appeal.” Refreshingly, even the Mini Strip’s body was left in its unfinished state with no colored paint applied; instead, just a thin film of transparent paint was added to protect against corrosion. Inside, the Mini Strip also makes use of recycled materials such as knitted fabric for the seats, recycled rubber with terrazzo-like pattern for the floor mats, and recycled cork for the dashboard topper pad, door shoulders, and parcel shelf. We think the Mini Strip is an absolute triumph in sustainable design and it proves just how desirable cars can be when minimalism and environmental concerns are the main design focus.

Here’s an automotive PR campaign we can get behind… Now that all Covid restrictions are lifted in the UK and with staycations in full flow, Lexus is celebrating the appeal of the open road and grand touring (more specifically) with a series of beautiful illustrations that form part of a competition. Inspired by vintage travel posters and created by UK artists, the artworks feature the handsome Lexus LC Convertible in a popular UK location. Rebecca Pymar focused her design on the Peak District, Queenie Moorhouse from Guildford featured the car in front of Brighton’s Palace Pier, and Joel Clark from Thame chose Tower Bridge in London for his design. Lexus has also been running the travel poster design project across other European countries and a public vote will be held on 23 August to decide the winner. In the meantime, a UK vote on the Lexus Instagram channel will run until 22 August.

Keen to integrate many of the 1.9 million homes that already have the brand’s Active Heating system installed, Hive has introduced a new EV Charging system that cleverly syncs with your energy tariff and works in unison with the award-winning Hive app. This means EV owners can plug in at home and automatically charge up when electricity is at its cheapest – which is nothing new, but signals a significant step change for what was one of the first ‘connected home’ suppliers. Priced from £599, the kit includes a smart home charger with a 3-year warranty and hassle-free installation from a British Gas electrical engineer.

Chinese electric firm Nio and Korean giant Hyundai are both planning to bring new, more affordable electric cars to market in the next two years. According to Auto Express, Nio is said to be close to launching a new ‘mass-market’ sub-brand that will arrive as a more affordable alternative to Nio’s premium market cars – such as the ET7 saloon and ES8 SUV. In a recent statement, the company’s CEO, William Li, said: “The relationship between Nio and our new mass-market brand will be like that of Audi-Volkswagen and Lexus-Toyota.” Li also expressed an ambition for his new sub-brand to undercut and outperform Tesla, saying: “We want to provide better product and service at prices lower than Tesla.” Nio is also apparently working on expanding its innovative battery-swap network, with plans to more than double its current capacity from 361 stations to more than 700 by the end of 2021, as it moves into the European market.

The Hyundai Group on the other hand, is focusing on a new SUV-styled electric city car that’s expected to arrive in 2023. It’ll be a direct rival to the electric Fiat 500 and forthcoming small electric cars from Volkswagen and SEAT. While it hasn’t been confirmed which of the Hyundai group’s brands the new compact EV will be launched by, it’s likely to be from either Kia or Hyundai, as they already produce compact models in the shape of the i10 and Picanto. The new city-focused model, expected to be styled like a mini SUV, is one of over 20 new battery-electric cars the Hyundai group plans to release worldwide by 2025.

The transition from an ICE car to an electric car is still a challenging prospect for many buyers and as a result many car manufacturers are employing some clever tactics to ensure the switchover is smooth and unintimidating. In this short film by BMW, it is clear that BMW is keen to remind buyers that its new iX3 SUV shares plenty in common with its new X3 SUV. There’s plenty to like about the film too… including some effective jump cuts, a very international cast and some wonderfully bright and breezy locations. We’re left wondering however if the iX3 is brave enough, bold enough and different enough to the ICE-powered X3 to really stand out. Check out the film and see what you think.