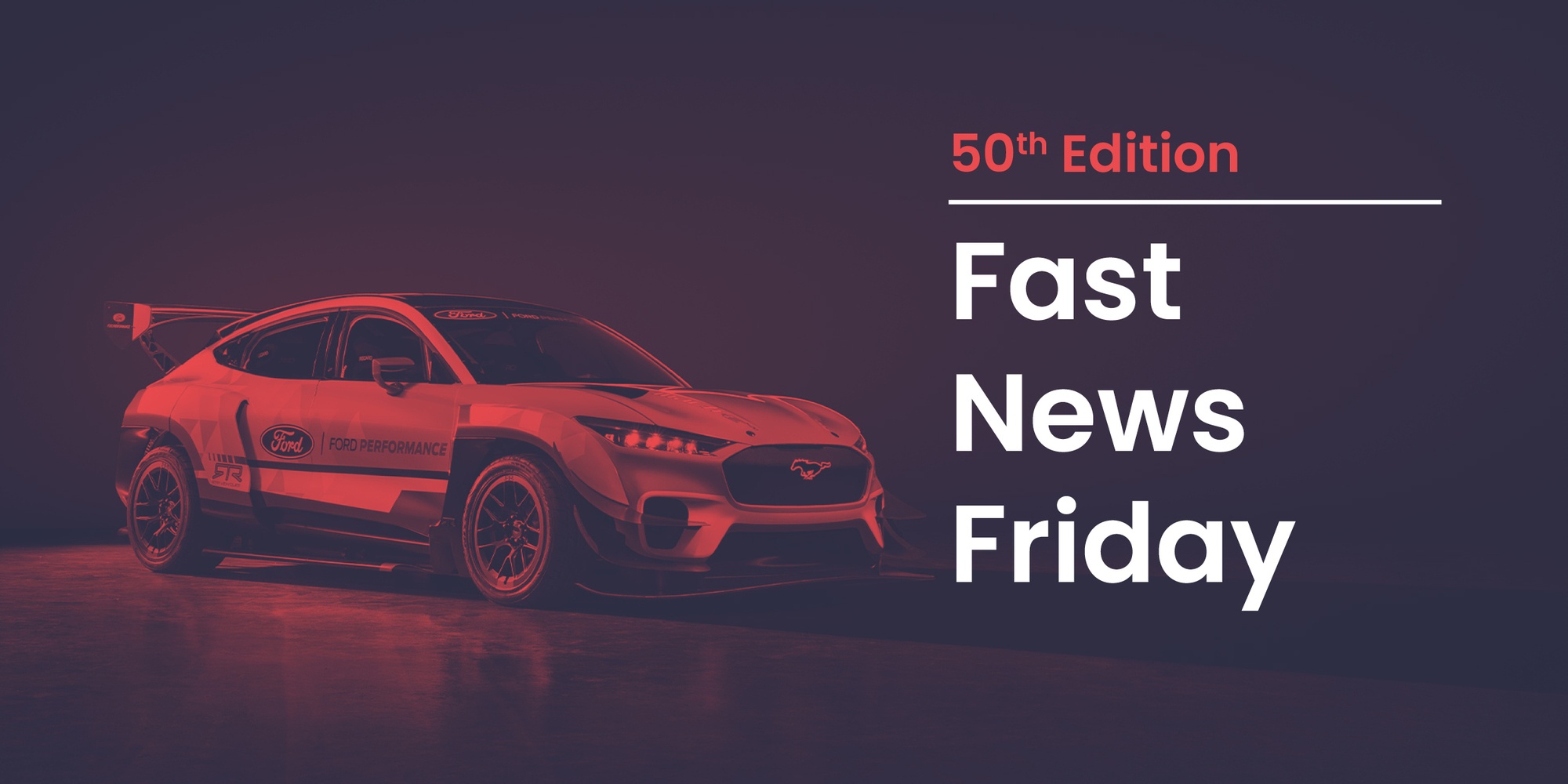 Welcome to the 50th edition of Fast News Friday – Foxtrot Papa’s weekly pick of automotive news and branded content. In this landmark edition, we bring you an awe-inspiring film from Ford featuring the insane Mustang Mach-E 1400, unearth a smile-inducing TikTok post that’s simple but brilliant and share news of a brand new electric go kart series from the world’s first integrated media, motorsport and talent brand, Electroheads. This and more in the links below. Enjoy!

Prepare yourself for the Ford Mustang Mach-E 1400

Just in case you were in any doubt, Ford is taking the move towards electric vehicles VERY seriously. Posted under the promise of ‘Anything you can do, we can do electric’, Ford’s latest mini-blockbuster film features the all-electric Mustang Mach-E 1400: a one-off all-electric prototype racer developed in collaboration with US-based tuning company, RTR Vehicles, taking on its very own petrol-powered rivals. Power is an astonishing 1,400 horsepower with more than 2,300 lb of downforce. In this suitably adrenaline charged film Vaughn Gittin Jr. burns rubber in the macho Mach-E (and lots of it!) alongside Ken Block, Chelsea DeNofa, Hailie Deegan, and Joey Logano, who are all driving Ford ICE vehicles. Let battle commence!

TikTok of the week

If anyone ever asks you to explain the thinking behind the TikTok social media platform, you could do much worse than simply sharing this brilliantly choreographed clip by @tfad_terrence. Shot at night on a rooftop carpark, the footage shows what appears to be several modified Toyota GT86s flashing their headlights to the beat of the overlaid soundtrack. Sound tacky? Yes it does, but the end result is charmingly simple, strangely watchable and with it, viral content gold.

Despite both the oxymoron in the title and the fact that gesture technology has been around for some time, this ‘contactless touchscreen’ tech story from Jaguar Land Rover caught our attention this week for another reason. Known as ‘predictive touch’ the technology is being highlighted as a way of reducing the spread of diseases in JLR’s cars, which will undoubtedly be an attractive proposition for many. Developed by engineers at the University of Cambridge, the company claims the screens also reduce distraction for drivers, and offer more control than simple left-right and up-down swipes.

This week marked the launch of the new Electroheads electric kart race series, which is part of the new Electroheads group – the world’s first integrated media, motorsport and talent brand. Inspired by F1 hybrid power unit technologies, the karts are designed by F1 engineer Rob Smedley, offering performance parity for significantly lower running costs. The key benefit over traditional petrol karts is that talent is the most important factor. The series responds to six-time F1 World Champion Lewis Hamilton’s call to make racing more democratic and diverse, and to ensure that driver talent is more important than your budget or your background.

First seen on Bentley’s EXP 10 Speed 6 concept at the Geneva Motor Show in 2015, the brand’s 3D-machined wood veneers have now made its way onto the new flagship Bentley, the Flying Spur Mulliner. Made from a single block of sustainable American Walnut or American Cherry timber, the panels will be fitted to the rear cabin door panels and are created by operators who carve the wood with a multi-axis machine to at least 0.1mm, which is less than the thickness of a human hair, according to the British car manufacturer. Bentley’s Head of Interior Design for the Flying Spur, Brett Boydell said: “Three-Dimensional Wood is the next interior design element we’ve taken from concept car idea to production reality. It works in perfect harmony with the three-dimensional leather quilting across the cabin of the Flying Spur and creates an even more special environment for those being driven.”