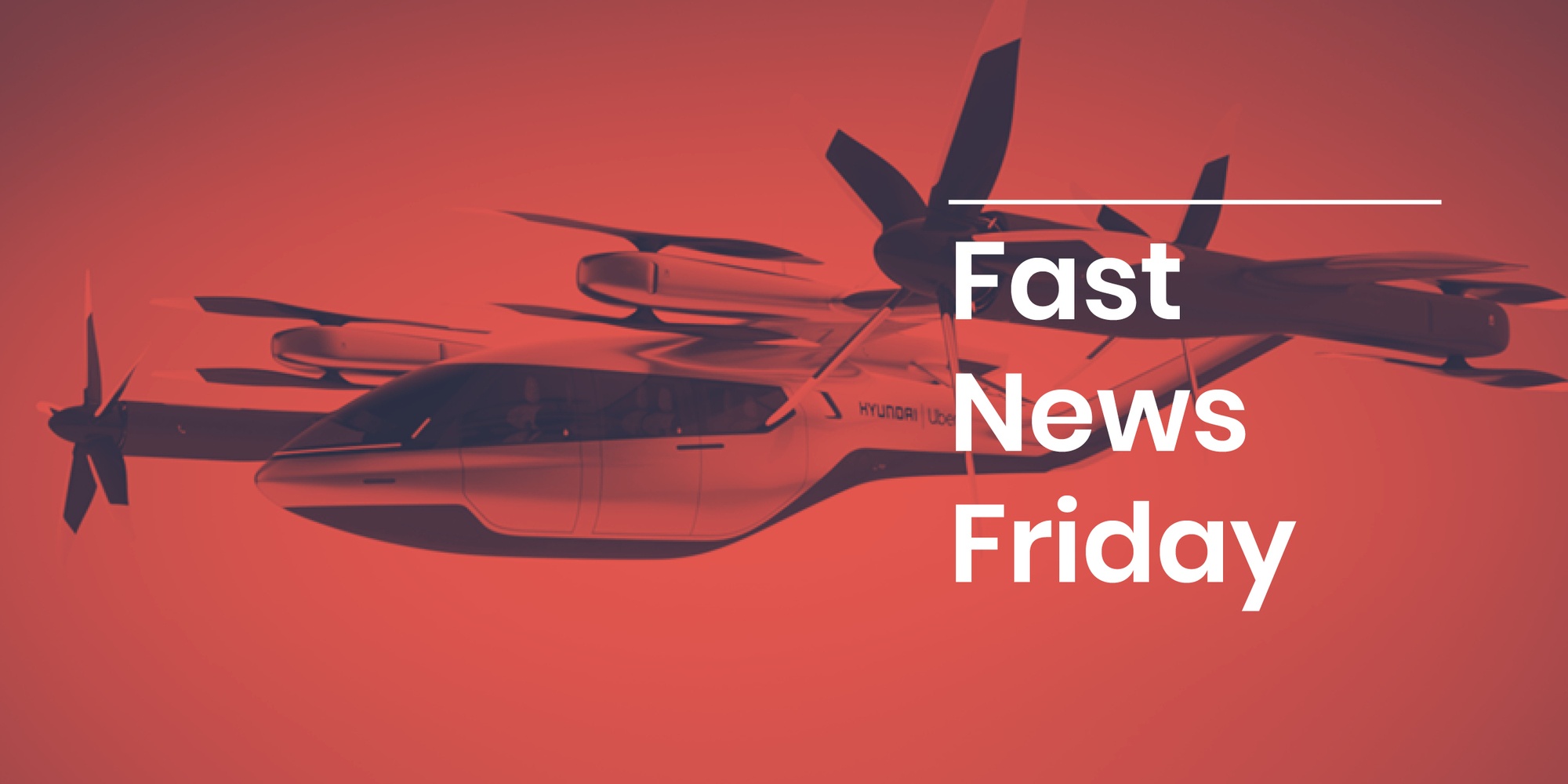 It would be a crime against Fast News Fridays past present and future if we didn’t kick off this week’s edition with a suitably mad story from CES, which took place in Las Vegas this week. As the world’s largest consumer technology fair, in recent years CES has increasingly become a place for automotive brands to debut their most avant-garde concept vehicles (more on those in our round up of 10 cars that will define the next decade) and this year was no exception.

As the first automotive brand to join Uber’s ‘uber elevate’ initiative, Hyundai made the headlines this week when it announced an all-electric full-scale flying taxi for the aerial ride-sharing app of the future. The collaboration with Uber will see Hyundai produce and deploy the aircraft, leaning on Uber for airspace, logistics and customer interface support. The prototype personal air vehicle (PAV) model—called the S-A1—will purportedly have a cruising speed of up to 180 mph at an altitude of around 300 – 600 metres, and will be capable of flights of up to 60 miles. As if that wasn’t enough, the company also boasts that during peak hours, it will require just 5-7 minutes for recharging—fingers crossed we’ll see a reduction on surge pricing as a result!

2. Subaru inject some (much needed) silliness into their latest TV spot

This week we’ve been loving Subaru’s new ad showcasing the pre-collision breaking technology in their Forester Hybrid. Created by MullenLowe, the short-but-sweet spot sees a near collision between the car and an errant sheep provoke a brilliantly silly flashback through the sheep’s short and somewhat bleak life before the car’s technology mercifully prevents the seemingly inevitable. Yes, it’s dumb. But it’s also exactly the kind of content likely to elicit brand recall from safety conscious members of the public looking to make the switch to a greener model. For that reason alone, it gets a big thumbs up from us.

3. No Renegade: Jeep joins the PHEV scene with the 4xe series

Jeep is taking the first steps to catch up with an increasingly busy market, showcasing its first range of PHEVs at CES 2020. Externally, the new vehicles will be an almost exact match for the existing product line, with the Compass, Wrangler and Renegade all remaining unchanged apart from a few additional blue accents and a ‘4xe’ moniker to distinguish them. Internally, the developments are still shrouded in mystery: FCA has not released any details on range, fuel economy or even the accompanying combustion engine. These might seem small steps, but they represent an important paradigm shift for a company that has long held a troubled relationship with the world of EVs. Late CEO Sergio Marchionne famously made headlines a few years back by inviting customers not to buy their expensive Fiat 500e, as each purchase represented a net loss for the company. While the conglomerate still lags behind in the sector in many ways, this represents the initial phase of Jeep’s commitment to offering an electrified powertrain on each of its vehicles by 2022, a process which will involve the development of at least a couple of pure electric vehicles as well as the hybrids showcased at CES 2020 this week.

Few cars are more recognisable than the Volkswagen Beetle. Originally designed by Ferdinand Porsche in 1934, the design brief was simple: create a car for the people. Throughout its 81-year production run nearly 23 million units were produced in several different continents. The Beetle, and later the Campervan, also managed to transcend its pre-war origins to become a symbol of peace. Fittingly then, VW decided to say farewell to its very own automotive icon, which is no longer in production, on New Year’s Eve by releasing this moving animated tribute. Created by ad agency Johannes Leonardo, and featuring a cover of The Beatles single Let It Be by the Pro Musica Youth Chorus, “The Last Mile” is sure to make you remember any experience you may have had with this hugely approachable and popular vehicle. You will also spot a glimpse of the forthcoming ID EV (which also happens to feature a rear-mounted motor) and several cultural references—yes, that is supposed to be Kevin Bacon from 1984 movie, Flashdance!

We’re always fans of initiatives that make EVs accessible to the masses here at FP, so we were excited to learn of the launch of a new all-electric digital car rental service in London this week. UFODRIVE has grown rapidly across Europe as demand for EVs have grown across the continent, and now operates in Brussels, Luxembourg, Hamburg, Cologne, Berlin, Paris, Amsterdam, Rotterdam, The Hague, Vienna and Dublin. It puts this success down to its easy-to-use app interface and the increased popularity of models such as the Tesla Model S and Jaguar I-Pace within the rental market. Given that our recent Electric is Now report proved that propensity to buy an EV significantly increases when a consumer has spent time behind the wheel, we hope that the advent of services such as this will continue to tip the balance in favour of increased adoption here in the UK.